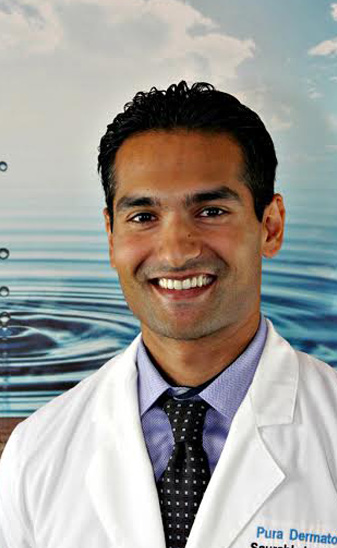 Saurabh Lodha attended Creighton University and graduated Summa cum Laude in 2003. At Creighton, he was accepted into the Phi Sigma Society for top biology majors and was also given the Plato award for most outstanding philosophy co-major. Dr. Lodha then attended NYU School of Medicine where he was elected into the medical school honor society and later received the Marion B. Sulzberger Dermatology award. During his time at NYU, Dr. Lodha was involved in many research projects and also received the most outstanding dermatology research award at the national student research forum in 2007. After completing his internship in internal medicine at St. Vincent’s Hospital in New York, he attended Drexel University for his residency in dermatology. At Drexel, Dr. Lodha had the honor of serving as chief resident for the department. He returned to New York to embark on his dermatology career and joined the clinical faculty at Columbia University’s Department of Dermatology in 2013. At Columbia, Dr. Lodha serves as a clinical instructor and is actively involved in didactics and resident preceptorship.